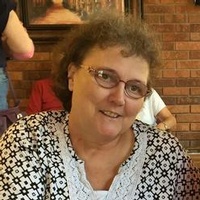 The funeral service for Valerie "Maw" Hodson, 59, of Ipswich, is 1:00 PM Saturday at First Baptist Church in Ipswich. Burial will be in Pleasant Hill Cemetery at Powell, SD.

Visitation is 5-7:00 PM Friday at Gramm Funeral Home, 720 N. 6th Street, in Ipswich and one hour prior to services at the church.

Val was born May 16, 1957 to Earl and Marveline (Weisser) Swanson, Sr. at Ashley, ND. While an infant, the family moved to Ipswich, SD. Val attended Ipswich Public School, graduating with the class of 1975. While growing up in Ipswich, Val would work in the family's bakery, where she learned baking and cooking skills.

She attended Stewart's School in Aberdeen following high school graduation and then worked as a hair stylist in Aberdeen for a few years. She then moved to Milford, IA where she embarked on a lifelong career in the restaurant business. Val cooked at and managed several eateries in Milford. In 1991 she moved back to Ipswich and married Clyde Hodson on September 5, 1992. She and Clyde purchased the drive-inn and started Maw and Paws Diner. The popular establishment served many people with her home cooked recipes for nearly 20 years. They then operated Swanee's for several years before focusing on their growing concession business. Maw & Paws Concession wagon became a favorite at the Brown County Fair and at many other area events. Val loved meeting new people at the events they served and created wonderful friendships.

Val also was a sales consultant for Beauty Control products for many years. She really enjoyed attending their national and regional conventions where she would learn of new products and tips to excitedly share with her many customers and friends.

Having spent her entire life serving others, she focused many hours in more recent years on fundraising for those in need. She enjoyed drama and theater and even wrote a script for a play which she produced and directed. She organized other fundraisers as well as being involved with Relay for Life, the local T.O.P.S. group and devoted time to volunteering at her church home, First Baptist Church in Ipswich.

Val loved spending time with her family and friends, especially cherishing movie days with her young grandchildren. She also had a fondness for camping when time allowed.

Val died Wednesday, March 29, 2017 at her home surrounded by her family.

She was preceded in death by her parents; step-father, Oscar Schumacher and one grandchild.

To order memorial trees or send flowers to the family in memory of Valerie Hodson, please visit our flower store.