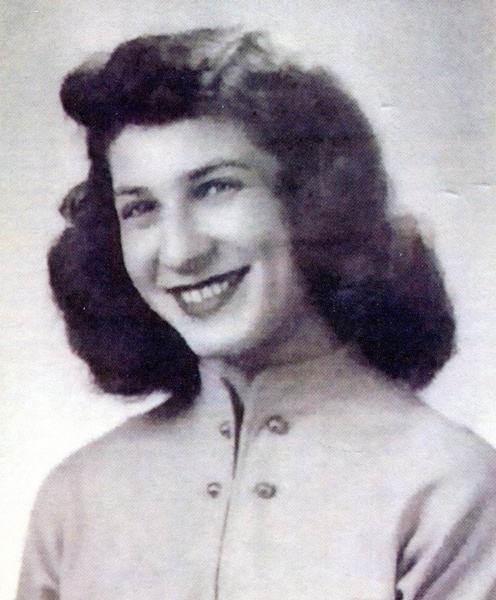 Mass of Christian Burial for Sylvia Ertz, 87, of Aberdeen and formerly of Ipswich, is 10:30 AM Monday at Holy Cross Catholic Church in Ipswich with burial to follow in the church cemetery.

A Liturgical Wake service and Rosary will be at 7:00 PM Sunday at Holy Cross with visitation beginning one hour prior.

Sylvia Marceille Wojick was born January 23, 1933 at Trinity Hospital in Jamestown, ND, the youngest of five children to Edward and Anna (Lavey) Wojick.  The temperature that day was 35 degrees below zero.

She was baptized at the hospital chapel before she and her mother boarded the Midland Train to Clementsville, ND. Here they were met by her father and transported by horse and sleigh 4 miles to the family farm.

Sylvia attended 1st and 2nd grade at Clementsville and completed the remainder of her elementary education at a country school in Rose Township, two miles from her farm home.  As long as the weather was fit she walked to school.

In the fall of 1947, Sylvia started high school at St. John’s Academy in Jamestown.  She was very active in music and won excellence awards for her singing at the contests.  She was a cheerleader and in her junior year was chosen to be the attendant to the homecoming queen.

She lived at the convent with Sisters of St. Joseph for her sophomore and junior year and often remarked on how she learned so many good things from the Sisters.  She graduated in 1951.  Throughout her life she has been a strong advocate for her Alma Mater.

In 1952 she moved to Glendale, CA and was employed by the Pacific Telephone and Telegraph Company.  In 1955, she transferred to Northwestern Bell in Aberdeen. She was trained as a private board exchange operator (PBX) and a teletype instructor. She also worked with the new intercom system at Northern State College and St. Luke’s Hospital.

On May 4, 1957, she married Duane Ertz at Sacred heart Catholic Church in Freid, ND.  Three sons were born to this union.  Following the birth of her first son, she terminated her service with the telephone company and became a full time homemaker.

In 1959, they moved to the Ertz family farm near Ipswich where Duane was the third generation on the farm.  He passed away in October of 2004, the same year that the farm was recognized as a Century Farm.  She received the award at the next years South Dakota State Fair. Sylvia remained on the farm for 8 years following her husband’s death.

During her lifetime, Sylvia always enjoyed music and dancing.  As a young lady, she sang songs for weddings and very much enjoyed playing the piano.  On one occasion, she and her husband won a waltz contest at the Elks Club in Aberdeen while she was recovering from a broken ankle.  Another time she and a partner were given a record album from Albert Mikesh for polka dancing.

In 1996 she donated her 100 year old Kimball Piano to a museum in Jamestown, ND in her father’s memory.  A year later, she replaced that piano with an electric keyboard and entertained at the nursing home and various other places.

She was a Den Mother for the Cub Scouts and she loved working with those little boys.  She was the past secretary for the Holy Cross Altar Society and worked on the banquet committee at Holy Cross for 25 years. She was also a past member and secretary for the Yellowstone Trail Cowbelle and had often been a judge for the Cowbelle Cook-Off.  She was often asked to judge the FHA Contests.  She was a member and past secretary of the Ipswich Golf Course.

She enjoyed being outdoors and doing yard work.  Trees were her favorite thing. She also enjoyed playing cards and was a member of the local Whist Club.  She liked to play shuffleboard, mingling with the group and all the fun they had.  She enjoyed bowling, but above all she loved to dance.  She often said she “couldn’t live her life without music.”

She devoted her married life to her husband, sons and grandchildren. They were her life.  She loved to cook, bake and enjoyed experimenting with new recipes which pleased her family.  In fact, in 1986 she won 3rd place at the South Dakota State Fair Pie Baking Contest. She loved entertaining, especially at holiday times. Sylvia didn’t enjoy sewing but instead she enjoyed remodeling her clothes to make something old look new.

She and Duane traveled as often as they could and enjoyed many bus trips. They also enjoyed outings with their family. For her 60th birthday, she went skiing and for her 70th birthday she and Duane went on a cruise.

Preceding her in death were her parents, her husband, one son, Dale, one daughter-in-law, Sherrie Ertz, two sisters and two brothers.

In her final message to her family and friends, Sylvia wrote, “Now I’m traveling on a new journey. I’m very anxious to see my husband and son again so we can begin our new life together. I’m not leaving my children behind, I’m just going on ahead to prepare a special meal that we can all share. And, to my friends, when you hear the music, dance on for me.”

Arrangements with Gramm Funeral Home of Ipswich.  Memories may be shared and flowers ordered at grammfuneralhome.com

To order memorial trees or send flowers to the family in memory of Sylvia Ertz, please visit our flower store.