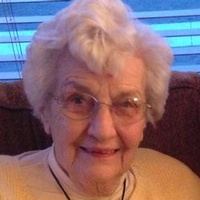 The funeral service for Shirley M. Petersen-Williams-Raethz, 90, of Aberdeen and formerly of Ipswich, is 2:00 pm Thursday, August 20, at UCC Church, Highway 45, in Ipswich. Burial will be in the Ipswich City Cemetery.

Visitation is 5-8:00 pm Wednesday at Gramm Funeral Home, 720 N. 6th Street, in Ipswich and one hour prior to the service at the church on Thursday.

Shirley Petersen Williams Raethz was born on the family farm outside of Ipswich, SD to Alfred and Beulah (Davies) Petersen on July 12, 1925 on her brother Arnold's 2nd birthday. She went to school in Ipswich and graduated with the class of 1943. She attended Northern Normal and Black Hills State and taught a number of country schools including Kent Township.

She married E. Howard Williams, at the original Powell Church on June 19, 1949, and from this union, they were blessed with 4 children. She continued to teach at Ipswich Public even after Howard's death in 1987. She spent time with her mother and then enjoyed traveling to see and spend time with her children and grandchildren.

On April 4, 2000, she married Kenneth Raethz, adding 8 more children and their families to her family. Shirley and Ken made their home in Apache Junction, AZ, until Ken's death in 2010. Remaining in Arizona, Shirley continued making memories with her family and her many friends both in Arizona and also in South Dakota.

In 2014, Shirley moved in with her son, Barney, and lived there until she entered Mother Joseph Manor this past June.

To order memorial trees or send flowers to the family in memory of Shirley Petersen-Williams-Raethz, please visit our flower store.