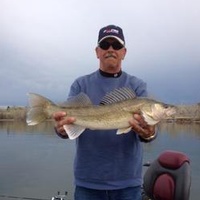 Ricky Lee Garner, 60, Rapid City, SD passed away on Tuesday, May 16, 2017 after courageously battling mesothelioma for over a year. He was on home hospice surrounded by his loving family when he left to join his parents in heaven.

Rick was born on May 8, 1957 in Huron, SD to Robert and Marge Garner (Langbehn). Rick graduated from Roscoe School District in 1975. Rick loved sports and was recognized in the top 100 high school basketball players in the country, set several track records, including a high jump record that stood for 41 years, and was starting quarterback. Rick married his high school sweetheart, Jacqueline Breitling, on June 4, 1978 in Ipswich, SD.

He lived in Roscoe until 1976 when he moved to Ipswich with Jackie. They later moved to Rapid City, SD in 1988 for job commitments. Rick worked construction most of his early life and started All Star Construction in 1992 with his partner, Terry Hulm. Rick could build almost anything and retired on January 1, 2017 due to declining health.

His true passion was his family. He loved attending his children's sporting events and traveled across the country for them. He was extremely proud of his children's accomplishments. Rick also enjoyed riding his motorcycle and was an avid hunter and fisherman. Rarely could you strike up a conversation and not find out where the fish were biting. He was awarded Angler of the year by Black Hills Walleye Unlimited and the Wyoming Walleye Circuit. He enjoyed hunting white tail deer and anything that flew. The thing Rick loved most about being outdoorsman were the friends and family he was surrounded by.

He was preceded in death by his parents; relatives; and several dear friends.

We will always remember him as a kind, gentle, and hardworking man. He was caring, compassionate, and cherished his family and friends. He loved the outdoors.

In lieu of flowers, donations can be made to South Dakota Walleyes Unlimited or Pheasants Forever.

Celebration of Life services will be Monday, May 22, 2017 at 10:00am at Parkview Evangelical Free Church in Rapid City with Rev. David Greenhood officiating.

A second service will be held on Wednesday, May 24, 2017 at 10:00am at Gramm Funeral Home in Ipswich, SD with Pastor Ron Wickard leading the service. Burial will follow at the Morningside Cemetery in Roscoe, SD.

To order memorial trees or send flowers to the family in memory of Ricky Garner, please visit our flower store.