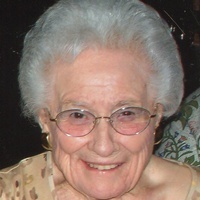 Her funeral will be 2:00 PM Sunday at the UCC Church, SD Highway 45 South, in Ipswich. Burial will follow at Pleasant Hill Cemetery at Powell.

Visitation is 3-6:00 PM Saturday at Gramm Funeral Home and one hour prior to the service at the church.

She worked at the Edmunds County Courthouse from 1937 to 1938 as an office clerk. She then received a Federal Government appointment to work in Leola, SD as an office clerk in an agricultural office. In 1941, she was transferred to the District Office in Aberdeen, SD where she worked until the fall of 1942.

Mary Jane married James H. Opsahl of Aberdeen on June 24, 1942. To this union, six children were born: Janice Elizabeth, James Clinton, JoAnne Kay, June LaVonne, Judith Lynn and John Michael. They lived in Aberdeen for a time and in 1949, they moved to the Opsahl Farm near Westport, SD. Due to her husband’s health in 1959, she was compelled to go to work to support her family.

Her work was found in Ipswich in 1960 as an office loan clerk for the ASCS Office. James passed away in 1974. Mary Jane continued to work until retiring with 25 total years of federal service in 1981. She then worked part time at the Ipswich Community Hospital for three years before becoming a volunteer at the hospital and the local nursing home. She officially retired at the age of 80.

She was a member of the Powell Presbyterian Church, Methodist Church of Leola, SD and joined the UCC church in Ipswich in 1960. She taught Sunday School, was a deaconess, trustee, treasurer of the church and was active serving on many church committees. She was current member of the Women’s Fellowship of the UCC Church. She also organized the annual services at the Powell church was moved into the Pioneer Village in Ipswich.

Mary Jane enjoyed singing solos all of her life, was member of a quartet and a member of the UCC Church Choir for many years.

When not volunteering her time at the church Mary Jane could be found volunteering for the American Cancer Society as the Edmunds County Crusade Chairman and Memorial Chairman for many years. She also assisted with blood drive in Ipswich, was a member of American Legion Auxiliary, Twentieth Century Club and the Ipswich Senior Citizens organization.

In her rare spare time she enjoyed making afghans, doilies, baking, playing cards, playing the piano and singing, as well as spending precious time with her family and friends.

She is survived by her children; Janice (Gerald) Kilber of Ipswich, James (Lois) Opsahl, of Aberdeen, Joanne (Wayne) Schlekewy of Las Vegas, June (Gary) Markuson of Las Vegas, Judith Lapka of Ipswich and John (Irene) Opsahl of Las Vegas; nine grandchildren and twelve great-grandchildren. She is also survived niece, Cynthia Gilbert and nephews Dennis and Randy Richards, as well as many friends.

UCC CHURCH - Ipswich
To order memorial trees or send flowers to the family in memory of Mary Opsahl, please visit our flower store.