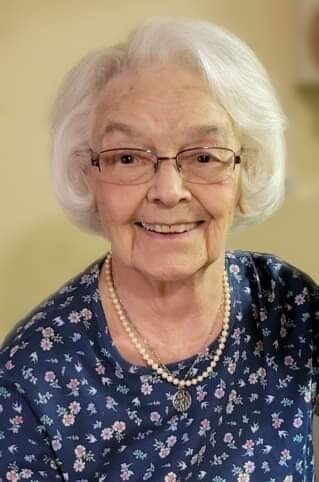 Marjorie was born on March 2, 1928, to Louis and Barbara Streit in Ipswich, South Dakota. She attended a one room country school in Powell Township and then Holy Cross School in Ipswich before she graduated from Ipswich High School in 1945. During her high school years she participated in cheerleading (and even skipped school once to make fudge with friends.)

While in school, Marjorie worked as a clerk at the Crissman Drug Store for about 2 years. Following her high school graduation, she worked at Woolworth Department Store in Minneapolis, MN.

She married Glenn C. Williams on April 23, 1946. They purchased the Streit farm and ranch in Powell Township south of Ipswich the same year. Together, they raised their family of five children. Marjorie enjoyed the accomplishments of their children and relished the times spent together. Her Depression-era upbringing allowed her to stretch a quarter into a dollar and she created a loving and caring home. She was a tremendous seamstress and would make all her children’s clothes by hand.

Marjorie was a devout Catholic that helped to organize the St. Monica Study Club in 1953 which lasted for 54 years. She also participated in the Holy Cross Altar Society, Legion of Mary, and Cow Bells. She enjoyed teaching CCD to the children at Holy Cross Catholic Church where she was a member of the parish for over 50 years.

Marj especially enjoyed gardening and canning and tended a large garden; her favorites being strawberries, rhubarb, and cucumbers. They always planted enough potatoes to last the winter and her canned pickle recipe was a favorite of everyone. With the help of her daughters, they also raised as many as 100 chickens, cleaning and freezing them every year.

In the 1980’s, Marj traveled to Washington D.C. with other agricultural women to lobby Congress for better farm legislation. The love of farming and ranching life kept Marj on the farm for 60 years. In 2007, Glenn and Marjorie built a new home in Ipswich where they lived at the time of Glenn’s passing.
In 2013, Marjorie moved to Olathe, KS to be nearer to two of her daughters and resided at Santa Marta retirement home. There she enjoyed playing cards, tea time with her friends, attending Mass, and being with her family.

Marj developed many lasting friendships over the years traveling on weekends to countless thoroughbred horse races. She looked forward to the Kentucky Derby and placing bets every year. When the couple retired, they loved to travel to Spain, Hawaii, Germany, New Zealand, and Alaska. Her other hobbies included golf and playing bridge.

Marj was passionately dedicated to the Holy Rosary and prayed it daily for Peace in the world and for her family.

She was preceded in death by her husband, Glenn, parents, Lou and Barbara Streit, sisters Viola Ward and Geraldine Taylor, brothers, Clarence Streit, Leroy Streit, and Gerald Streit, and many friends, cousins, aunts, and uncles.

Arrangements are with Leonard-Gramm Funeral Home of Ipswich. Condolences and memories may be shared with her family and flowers ordered at www.leonardfh.com

To order memorial trees or send flowers to the family in memory of Marjorie Williams, please visit our flower store.