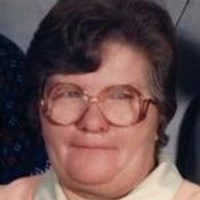 The funeral for Margaret Scherbenske, 68, of Roscoe is 10:30 AM Wednesday at North Highland United Methodist Church, 620 15th Ave NE, in Aberdeen. Pastor Mark Ehrmantraut will lead the worship service.

Burial will be in Sunset Memorial Gardens.

Visitation is 5:00 - 7:00 pm Tuesday at Gramm Funeral Home, Us Highway 12, Ipswich and one hour prior to the service at the church.

Margaret was born April 27, 1942 to Jacob and Maggie (Zimmerman) Moser in Eureka, SD. She was raised in Ashley, ND where she attended school. As a young lady she moved in with her sister, Esther, and helped out watching Esther's children.

She married Elroy Scherbenske on March 8, 1963. They made their home on a farm near Leola, SD. They moved to Roscoe, SD where Elroy took a job as a mechanic. While in Roscoe, Margaret raised her family and eventually became the babysitter for her grandchildren.

Margaret's family and her faith were the center of her life. While she enjoyed travelling with Elroy, fishing and craftwork, it was her time spent with her family that she most treasured.

She centered her life on her faith. She had just recently joined the North Highland's United Methodist Church in Aberdeen after a being a long time member of the church in Roscoe. It was her faith that prepared her pass on to Jesus' arms on Saturday, November 6, 2010 at the Golden Living Center in Ipswich.

Her parents, one brother, Rubin Moser and two brothers-in-law, Leonard Buchholz and Daniel Wick preceded her in death.

To order memorial trees or send flowers to the family in memory of Margaret Scherbenske, please visit our flower store.