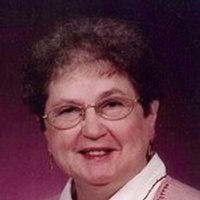 Mass of Christian Burial for LaVerne Heier, 69, of Ipswich, is 10:30 a.m. Wednesday at Holy Cross Catholic Church in Ipswich. Burial will be in Holy Cross Cemetery.

LaVerne was born January 12, 1940 at Strasburg, ND to Carl and Johanna (Reinbold) Unser. She was raised on the family farm and attended rural schools. She then attended Strasburg High School.

Throughout the years she was a housewife, school cook at Holy Cross School and a substitute librarian at the Ipswich City Library.

She enjoyed making and collecting porcelain dolls, playing cards with friends and family, camping, baking an cooking German favorites for her family, listening to Daniel O'Donnell cd's and finding great deals while shopping with Josie, Janette and her girls. She loved family gatherings an always made sure that everyone had a wonderful time and had plenty to eat.

She was preceded in death by her parents.

To order memorial trees or send flowers to the family in memory of LaVerne Heier, please visit our flower store.