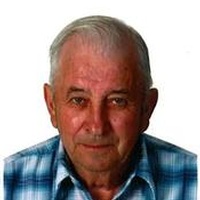 A service will be 10:30 AM Friday at Grace Lutheran Church in Oakes with visitation starting at 9:30.

A funeral service will be at 10:30 AM Saturday at St. John Lutheran Church in Hosmer with burial and military honors at Bethany Cemetery in Hosmer.

Kermit Calvin Ulmer was born January 19, 1925 to Gustav & Elenora (Walter) Ulmer on a farm near Hosmer, SD. He attended rural school in the area and graduated from Hosmer High School in 1943. He then farmed with his father 12 miles west of Hosmer until 1950, when he was inducted into the US Army at Ft Riley, KS. Kermit was stationed in Japan for a year, and then served in the Korean War at the 38th Parallel. He was discharged Oct 1952, obtaining the rank of Sgt First Class.

Follow the service, Kermit returned to the farm and married Lorene (Crawley) Clifford on January 18, 1953 at Hosmer. In 1954 Kermit attended Reisch Auctioneer College in Mason City, Iowa, which was the beginning of more than 35 years in the auction and livestock business. In 1957, he and his family moved into Hosmer, at which time he began auctioning at sale barns in Eureka, Aberdeen, Bowdle, Leola, and Wishek.

In 1961 Kermit and Norbert Simon purchased the Bowdle Livestock Comm. Co. Kermit and Norbert built a new sale barn and cafe in 1964 on the south edge of Bowdle, which they operated until selling it in 1971. During 1967-68, they also leased the sale barn in Philip, SD. Kermit moved to Oakes in 1971, where he managed Oakes Livestock for a short time, then auctioned at the West Fargo Stockyards for seven years. Kermit married Myra Gentz on June 13, 1975 in Oakes. Together, they operated K& M Dragline Service and Oakes Auction Service. While semi-retired, Kermit drove truck for ten years with SD Wheat Growers in Oakes as a seasonal employee.

Kermit was a member of the American Legion in Oakes and Hosmer, SD-serving as commander at each Post, the Hosmer Sportsman Club, the VFW in Oakes, Grace Lutheran Church in Oakes, and St John's Lutheran Church in Hosmer. Kermit was an avid trap shooter, hunter, and fisherman and for many years enjoyed fishing from his pontoon boat. He enjoyed dancing, gardening, and playing cards, where his skills were second to none. Kermit will be remembered for his warm smile, and was always ready to share a joke or a witty one-liner with everyone.

To order memorial trees or send flowers to the family in memory of Kermit Ulmer, please visit our flower store.