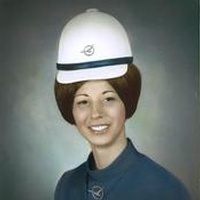 Visitation is 5-7:00 pm Friday at Gramm Funeral Home in Ipswich and one hour prior to services at the church on Saturday with a Rosary being said at 10:00 am.

Julie was born June 19, 1946 to John and Lena (Gisi) Malsom in Hoven, SD. She attended school and graduated from Roscoe High School. She then attended Presentation College in Aberdeen. Following her graduation from college, she taught school in Salem and then in Huron, SD.

Julie made a career change and embarked on a thirty year career as a flight attendant. Her career found her flying the skies and serving passengers with North Central Airlines, Republic Airlines and Northwest Airlines being based in Minneapolis, MN.

She was very independent, caring, generous, fun loving and compassionate in the way she approached life. She loved her nieces, nephews and their families. She found great joy in having them be a part of her life.

Her parents, John and Lena Malsom and a brother Alan "Sonny" Malsom preceded her in death.

To order memorial trees or send flowers to the family in memory of Julie Malsom, please visit our flower store.