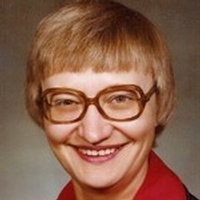 The funeral service for Janell Winkler, 71, of Aberdeen and formerly of Roscoe, is 2:00 pm Monday at St. Paul Evangelical Lutheran Church in Roscoe with Rev. Winfried Schroeder leading the worship service. Burial will be in Morningside Cemetery.

Visitation 5-7:00 pm Sunday at Gramm Funeral Home in Ipswich and one hour prior to the service at church Monday.

Janell Winkler was born at home on the farm in Glover Township south of Roscoe to Theophil and Emma (Buechler) Winkler on December 21, 1938. She grew up on the family farm and attended grade school in Roscoe, often staying with her grandma Winkler in town during the week because of limited transportation from the farm. She graduated from Roscoe High School in 1957.

Following graduation she moved to Aberdeen and worked at JCPenney. She started working as a receptionist for Dr. William Taylor in 1960 and worked for him and his associates for over 25 years before beginning employment with Family Care Center where she worked until 1996. She prided herself in the medical knowledge she had gained in over 35 years of working in that field. During those years she met many people and was quick to stop to visit these acquaintances any time they crossed paths.

Health issues forced her retirement in 1996, but improved enough to allow her to live in her own apartment at Davis Court until 2008. She eventually moved to Golden Living Center in Ipswich where she resided until God answered her prayers and took her home on March 1, 2010.

Janell found great enjoyment and spent countless hours meticulously creating beautiful ceramic work. Her family will be reminded of her often with the many special pieces she created for them.

Janell was a lifelong member of St. Paul's Lutheran Church in Roscoe where she was baptized in January of 1939 and where she was confirmed by Pastor George Bolt on July 27, 1952. She was also a part of the Trinity Lutheran family where she attended church often during the many years she lived in Aberdeen.

Grateful for having shared in her life are her sister, Bernice and brother-in-law, Earl Hettick of Roscoe; nephews and nieces, Donald (Sandy) Hettick, Dale (Lori) Hettick, David (Lori) Hettick all of Roscoe, Deanne Hoyle of Ipswich and Denise (Kent) Wieker of Claremont and 15 great-nieces and great-nephews.

To order memorial trees or send flowers to the family in memory of Janell Winkler, please visit our flower store.