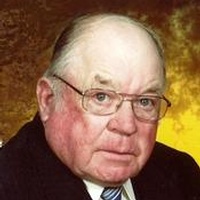 The funeral service for Herbert H. Schumacher, 86, of Hosmer, is 10:30 Friday at St. John's Lutheran Church in Hosmer. Rev. Patrick Hahn will lead the worship. Burial with military honors follows at Bethany Cemetery.

Herbert Harold Schumacher was born May 7, 1927 in Sangamon Township where he also attended school through the eighth grade. He entered the U.S. Army in November 1945 and was honorably discharged on February 20, 1947. He returned to the family farm until he was united in marriage with Alice Dabbert on June 8, 1952. They moved to their current homestead in 1956.

They were blessed with four children. He was a member of St. John's Lutheran Church and had served on the church council several times. He served as a 25 year member on the Farmers Union Cenex Board. He was also a 65 year member of Legion Post 189.

He was preceded in death by his parents, two brothers, Lawrence and Delbert, and one sister in infancy.

To order memorial trees or send flowers to the family in memory of Herbert Schumacher, please visit our flower store.