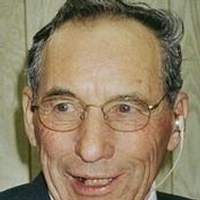 The funeral service for Helmuth Kirschenmann, 85, of Ipswich, is 2:00 pm Tuesday at St. Paul Evangelical Lutheran Church in Roscoe with Rev. Winfried Schroeder leading the worship. Burial follows at Morningside Cemetery at Roscoe.

Visitation is 6-8:00 pm Monday at Gramm Funeral Home in Ipswich and one hour prior to the service at the church on Tuesday.

Helmuth Kirschenmann, son of Christina Mayer and Gotlieb Kirschenmann was born at his parent's farm near Hosmer on November 11, 1926. He was raised near and attended school in Hosmer, S. D.

Helmuth served his country in the U.S. Army from 1944 to1947 where he was stationed in both North Korea and South Korea. He was assigned as an artillery sergeant, where he became a certified sharp shooter and earned an honorable discharge.

Helmuth lived on the farm until Wednesday, Sept 12, where he passed away peacefully in his striped overalls, while resting in his favorite chair.

He was preceded in death by his father, Gotlieb Kirschenmann, his mother, Christina, his wife, Neva, both his brothers, Ervin and Elmer Kirschenmann, and five sisters, Clara Sutter, Albina Claiborne, Adeline Preszler, Irma Nehlich, and Ella Bosch.

We would like to thank a valued and exceptional friend, Mabel Ulmer from Mobridge, for checking in on him and being his "ears" for doctor appointments, due to severe hearing loss.

His memory will be carried with us as we reflect on our lives with him during our farm experiences, his words of wisdom about life experiences and how to live experientially.

To order memorial trees or send flowers to the family in memory of Helmuth Kirschenmann, please visit our flower store.