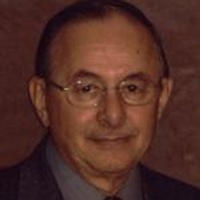 The funeral for Harry Himmerich, 70, of Roscoe, is 11:00 am Friday, September 10 at St. Paul Evangelical Lutheran Church in Roscoe with Rev. Winfried Schroeder officiating.

Burial will follow with military honors at Morningside Cemetery in Roscoe.

Visitation is 6:30-8:00 pm Thursday at Gramm Funeral Home in Ipswich and one hour prior to the service at the church on Friday.

Harry was born September 17, 1939 to John Jr. and Clara (Preszler) Himmerich on a farm northwest of Roscoe, SD. The family moved into Roscoe while Harry was just a youngster. He attended school in Roscoe and graduated from Roscoe High School in 1958.

He served in the US Army from 1959 to 1961 and spent a portion of that time in Heidelberg, Germany.

After being honorably discharged from the service, Harry returned home and started school at Northern State College in Aberdeen. During this time he met Opal Tory in Aberdeen. They were married September 6, 1964 at Bethlehem Lutheran Church in Aberdeen.

After Harry completed his degree in 1966 he started his teaching career. His first teaching post was in Hosmer. They lived there a short time, but moved to Roscoe after the house they were living in was sold. In the fall of 1967, Harry started teaching and coaching at Roscoe High School. His career in Roscoe as a Social Sciences teacher, football, track, basketball and cross country coach would span 34 years. During his tenure, he started the tradition of taking the senior class to Washington DC, a tradition that the school carries on today. He received many athletic/coaching awards both regionally and on the state level. He was dedicated to the success of young people and was proud of the lasting relationships that he developed. Harry was a great communicator and loved to learn. He bolstered his own knowledge during his teaching days and continued in retirement to learn about our history and the Presidents. He even journeyed to visit graves of all of our Presidents with the exception of Ronald Reagan's whose grave he had planned to visit.

Harry gave of himself through his service to his school, the community and his church. He was an active member of St. Paul Evangelical Lutheran Church in Roscoe and was currently serving as the president of the church council. He had served on the church council and acted as president, recording secretary and the financial secretary. He was also a past member of the Roscoe Commercial Club and had served as its' President and Vice President. He was a retired member of the Roscoe Volunteer Fire Department and had served as the secretary for many years. He was a member of the Andrew and Harold Schauer Legion Post 259 of Roscoe. Harry had also served as the chairman of Roscoe Education Association, The Edmunds County Republican Party, and he also served as the secretary for the Yellowstone Trail Conference.

He was a very fond of doing genealogy work, history, the presidents, fishing, golf, playing cards, doing crossword puzzles, catching any baseball, basketball or football game that he could. He didn't let his diagnosis with cancer slow him down and was very active to his last breath.

Thankful for having Harry in their life are his wife, Opal of Roscoe; son, Shane (Lela) Himmerich of Sioux Falls and their daughter, Paige; daughter, Annette (Gregory) Sonnen of Rockwall, TX and their children Gretta and Trevor; Two sisters, Dolores Sahli of Roscoe and Diana (Barry) Erickson of Tulare; two brothers, Melvin (Renetta) Himmerich and Leo (Georgia) Himmerich all of Roscoe.
Preceding Harry in death are his parents and one brother- in-law, Harold Sahli.

Harry died Monday, September 6, 2010 at Methodist Hospital in Rochester, MN with family at his side.
www.grammfuneralhome.com

To order memorial trees or send flowers to the family in memory of Harry Himmerich, please visit our flower store.