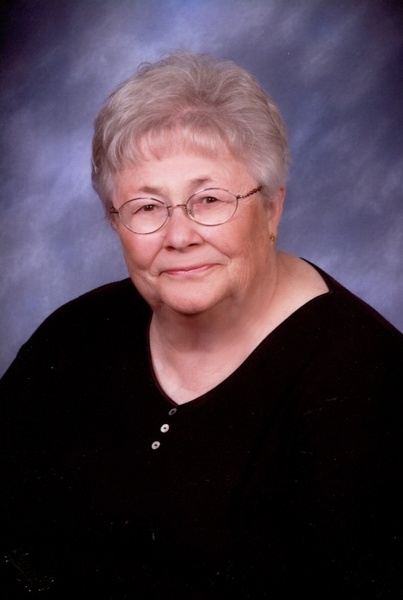 The funeral service for Gwenda Kolb, 79, of Aberdeen and formerly of Ipswich, is 2:00 PM Friday at Holy Cross Catholic Church in Ipswich.  Fr. Timothy Smith will lead the service.  Burial is in Holy Cross Cemetery in Ipswich.

Visitation begins at Noon at the church on Friday with a Rosary prayed twenty minutes prior to the start of the service.

Gwenda Katharina Ertz was born September 29, 1940 to Edward and Irene (Pfaff) Ertz in Ipswich. She was raised on a family farm south of Ipswich and attended country school for a few years. She then attended Holy Cross Catholic School and graduated from Ipswich High School.

After graduation, she moved to Aberdeen where she worked as a bank teller at First National Bank. She married Al Kolb on June 20, 1960 and they made their home in Ipswich. Six children were born to this union.  Gwenda spent more than 30 years working for the ASCS Office in Ipswich.

Raising her six children and actively pursuing their interests was the focus of her life. She loved her grandchildren and enjoyed watching them grow, keeping up with their interests and activities was a great joy for her. Yet, she still found time and enjoyed the company of friends, whether on the golf course or playing a rousing game of cards into the late hours of the night.  She much enjoyed catching up on the latest news of the town with friends.  Her downtime was spent watching all sports. She was an avid fan of the Minnesota Twins and Vikings.  During the current Covid-19 situation, she lamented that the games on TV were all “old games she had seen before but she watched them anyway.”  She was a faithful and active member of Holy Cross Catholic Church in Ipswich and after moving to Aberdeen several years ago she became a member of St. Mary’s in Aberdeen.

Gwenda died Thursday, May 28, 2020 at Prairie Heights Healthcare in Aberdeen.  Her independent spirit and strong will are cherished by her family and friends.

She was preceded in death by her parents, brother, Eddie Ertz and sister, Jean Bullock.

Condolences and memories may be shared with her family at grammfuneralhome.com or cards may be addressed to  Gramm Funeral Home, Kolb Family, 720 N 6th St., Ipswich, SD 57451.

To order memorial trees or send flowers to the family in memory of Gwenda Kolb, please visit our flower store.