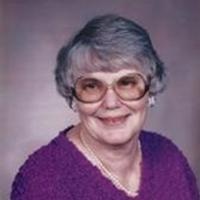 A Graveside Service will be held Wednesday, November 8,at Holy Cross Catholic Cemetery in Ipswich starting at 1:00 PM.

Gladys Leona Uttenhove was born on the family farm in Mina, South Dakota on September 19, 1917, the 4th of 5 children, to Charles and Theresa (Schubert) Uttenhove. She married Peter L. Baer on December 17, 1941 in Bennetsville, North Carolina.

After Peter's Army discharge, Peter and Gladys settled in Ipswich, South Dakota where they raised their two sons: Gerald and Albert. Following retirement, they moved to Aberdeen, South Dakota in 1970, and to Shakopee, Minnesota in 1974. Gladys had a love for gardening, crocheting, sewing and bingo.

The family would like to thank Friendship Manor for the love and care shown to Gladys in the five years that she was a resident.

To order memorial trees or send flowers to the family in memory of Gladys Baer, please visit our flower store.