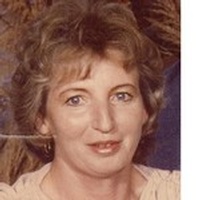 Visitation is Monday from 4-8:00 p.m. at Gramm Funeral Home in Ipswich and one hour prior to the service at the church.

Mom was born to Clifford J. Laughridge and Ethel June Ballard in Peabody Kansas. Her family moved to Vallejo California when she was 5 years old where her Dad worked in the ship yards. She went to Vallejo School and Vallejo High. Her first job was working as a car hop at the A&W Root Beer in Fresno where she used her roller skating talent to skate from car to car taking orders.

While at a roller rink in Vallejo, she met a good looking sailor, Francis Bobby. He was stationed there while in the Navy. They drove to Reno Nevada to get married on Dec 23, 1951. She worked at a theater and as a dancing teacher while Francis was serving over seas.

After farming for 23 years they moved to Ipswich in 1976. While continuing to raise her family and now grandchildren, Mom worked at the Ipswich Hospital as a nurses aid for 5 years. She volunteered in the community by being President of the Hospital Auxiliary, 4H leader, Home Economics Judge, President of the American Legion, and a member of Ladies Aid at Zion Lutheran Church.

Mom loved life and fulfilled many life dreams. She visited Africa where she saw the great Victoria Falls, shot pictures of many animals and camped in tents close enough to hear the wild animals come alive after the heat of the day. She earned the title of being a great Alaskan Bear Hunter by shooting a black bear at Stoney River in the Alaskan Range. She walked and shopped the streets of Italy and leaned with the tower of Piza. She wined and dined in New York while enjoying the finest spas and theaters. She traveled the entire United States including Hawaii and Washington D.C. She loved to join her children in sunny Mexico. She often went to Cabo San Lucas and while in Loreto she saw all sorts of sea life including sting rays, blue whales, dolphins and flying fish.

These life dreams provided great experiences and conversation pieces with family and friends but what defined our Mom was her never ending love of her family, a welcoming spirit of all, the ability to make a friend and her level of patience with 9 kids, 26 grandchildren and 17 great grandchildren, and a desire to be Forever 39.

Geraldine died Thursday, July 3, 2008 at her residence after a lengthy battle with cancer.

To order memorial trees or send flowers to the family in memory of Geraldine Bobby, please visit our flower store.