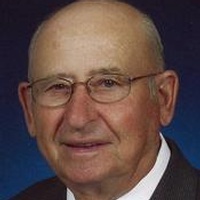 Visitation is at Holy Cross Church in Ipswich on Wednesday Nov 16 from 6:00 - 7:00 pm, with family members present, followed by a Liturgical Wake and Rosary.

There will also be visitation for one hour prior to the funeral on Thursday at St. Mary's.

In lieu of flowers the family requests donations to your favorite charity in Frank's honor.

Frank was born Nov 21, 1925 to Paul & Anna Mary (Roth) Heinz in Mina, SD. He attended grade school at Cortland Township. He was inducted into the US Armed Services in Jan. 1945 at FT. Snelling. After receiving training in the Army Medical Corps he went overseas. After 15 months in the Asiatic-Pacific, he returned to the states and was discharged at FT. Lewis, WA in Oct 1946. He then returned to farming near Ipswich. He married Rosemary Schmidt in Oct. 1948 and had 5 children.

Frank served on the Belle township board for 36 years; was a county committee person at the ASC office for 13 years; was an officer on the FHA board for 3 years; served 1 term as Edmunds County commissioner. He was a member of the Catholic Order of Foresters for 63 years; received the 4th degree Knights of Columbus; was a lifelong member of Holy Cross and served on the parish board.

Frank and Rosemary moved to Ipswich in 1988. Rosemary passed away in Nov 1994. In January 1996 Frank married LaVerna Roth in Castro Valley, CA.

Frank enjoyed farming with his 2 sons and traveling to visit his other children. He was very quick witted and loved to joke with his grandchildren. He restored a Super M tractor with his friends, went on many tractor runs and parades. He loved to dance, attend polka festivities.

He is preceded in death by his wife Rosemary, parents, five brothers and three sisters.

To order memorial trees or send flowers to the family in memory of Frank Heinz Sr., please visit our flower store.