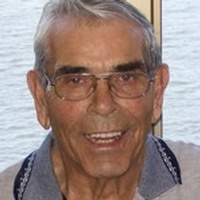 Mass of Christian Burial for Frank A. Gisi, 70, of Hosmer, is 10:30 a.m. Tuesday at Holy Trinity Catholic Church in Hosmer. Fr. Rader will serve as the Celebrant of the Mass. Burial will follow with military honors in the church cemetery.

A Liturgical Wake Service and Rosary will be held at Holy Trinity Catholic Church on Monday at 7:30 p.m.

Visitation is 3:00 to 5:00 Monday at Gramm Funeral Home in Ipswich and for one hour prior to both services at the church.

Frank was born in Hosmer on January 21, 1938 to Andrew and Carolina (Schoch) Gisi. He was educated in the Hosmer School System, graduating in 1956.

He served his country honorably from 1957-1959. The US Army sent this small town boy to Korea where he experienced many things for the first time. Upon completion of his service he returned to Hosmer.

In 1960, Frank joined Valley Telephone Cooperative as local area manager. He retired in 2000 after almost 40 years of dedicated service. In 1961 he met the love of his life, Marlene Hinds who was the new teacher in town. They were married on August 6, 1962 at Holy Trinity Church in Hosmer.

Frank was a 50-year active member in the Hosmer American Legion and a life member of the Eureka VFW. He was a lifelong member of Holy Trinity Catholic Church and was on the church council when the church was built. He also served as a sexton of the church cemetery for many years. He was a member of the Hosmer Volunteer Fire Department, Hosmer Sportsman's Club, Hosmer Commercial Club, and served on the city council. He was also a proud 22-year member of AA.
Frank enjoyed many things in his life but mostly enjoyed eating popsicles with his granddaughters, playing cards with the guys, fishing, and having "shop" time with his best friends.

His generosity will be missed throughout the Hosmer area, as he was always looking out for others' needs, especially those of his mother and extended family. If it was broken, Frank could fix it, and if you needed a part or a tool you could use it. His only request was "you put it back where you got it".

Frank A. Gisi passed away peacefully at his home in Hosmer on October 10, 2008.

He was preceded in death by his parents; four sisters, Tillie, Barbara, Florence and Rose; and 4 brothers, Ludwig, Albert, Paul, and Joseph (in infancy).

To order memorial trees or send flowers to the family in memory of Frank Gisi, please visit our flower store.