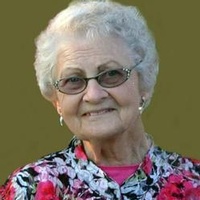 Evie was born on February 21, 1930, to Rochus and Mary (Grabowski) Geffre in Leola, SD. She was raised in Leola where she attended country school; Evie was a graduate of Leola High School in 1948. After graduation, she earned her teaching certificate and started teaching country school south of Craven Corner. Evie married Lyle Steinhoff in Leola after he returned from the service on July 12, 1951.

After their marriage, Evie and Lyle moved to Ipswich, purchased a home and lived there until the time of her death. Evie was very involved in the Ipswich and Holy Cross community: raising five children, serving on the Ipswich City Council, and washing and ironing for the Ipswich Hospital For 21years. After the hospital closed, Evie began working for the Ipswich Senior Center and worked there into her 70's. Evie was a member of Holy Cross Parish, The Catholic Order of Foresters, the Even Dozen Extension Club, Women's Altar Society, and many card groups like her Saturday night pinochle group.

Evie was a true prayer advocate for her children and grandchildren. She was dedicated to the Holy Rosary, and prayed it daily. Among other things, Evie will be remembered for her homemade cinnamon rolls, potato pancakes, chocolate chip cookies, and always being up for a game of cards.

To order memorial trees or send flowers to the family in memory of Evelyn Steinhoff, please visit our flower store.