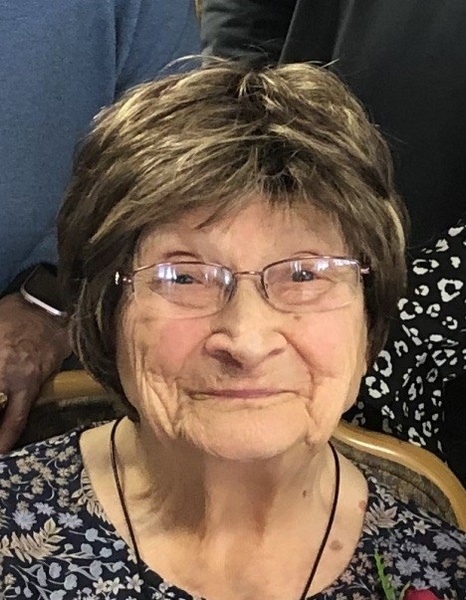 The funeral service for Emma Martel, 102, of Hosmer, is 10:30 AM Saturday, September 25, 2021 at Gramm Funeral Home in Ipswich.  Burial will be at Bethany Cemetery in Hosmer.

Visitation is 8:30 AM to the time of the service at the funeral home on Saturday.

She and her friend Maggie went to Minneapolis where they worked at the Swift Meat plant in St. Paul and later at a gun powder plant in Rosemount, MN.  After a short while they returned to Hosmer. She moved to Washington for some time to help with house work for relatives and was able to see the love of her life, Walter, while he was doing military training there.

Emma married Walter Martel in 1946.  They made their home on Walter’s parent’s farm.  While they worked together on the farm, she also found time for raising flowers and vegetables in her garden and to raise their four children, Charles, Ruby, Donald and Elaine.

Emma was also a member of the American Legion Auxiliary and the Hosmer Senior Citizen’s Home Auxiliary. She served in leadership roles in both organizations over the years.

In 1982 she and Walter moved into Hosmer where she grew vegetables and flowers in her beautiful gardens.  Even though she was older than many of her friends, she became their driver and took them to appointments, dinners and shopping in area towns.

She moved to Aberdeen and lived at Primrose Apartments in late 2006.    She later moved to Bethesda Home where she passed away on Monday, September 20, 2021.

Left to remember her smile and kindness are her children, Charles (Alayne) Martel of Lansdale, PA, Ruby (Ron) Fuhrmann of Oro Valley, AZ, Don (Christine) Martel of Aberdeen, and Elaine (Gary) Scherbenski of Aberdeen; five grandchildren and one great-grandchild.

Her parents, husband, two brothers and one sister preceded her death.

Memories may be shared and flowers ordered at grammfuneralhome.com

To order memorial trees or send flowers to the family in memory of Emma Martel, please visit our flower store.