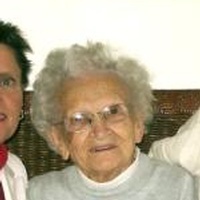 (Hosmer) - Mass of Christian Burial for Elsie L. Burgad, 95, of Hosmer is 10:30 am Monday, June 7, 2010 at Holy Trinity Catholic Church in Hosmer with Fr. DeWayne Kayser, Celebrant. Burial will be in the St. Philip Neri Catholic Cemetery in Napoleon, ND.

Visitation is one hour prior to both services at the church.

Elsie was born Jan 20, 1915 to John and Elizabeth (Mueller) Sieler. At the age of three her family moved to a farm northeast of Wishek. She attended school in the Arvada School District and completed grade school.

When Elsie was 19 years old she moved to Lodi, CA and went to work for the Governor of California as his maid. She returned to Wishek just two years later as her parents' health was failing.

She married George S. Burgad on November 14, 1941. Following their marriage they made their home on the Burgad farm for a short time before moving to the Sieler family farm for one year. They then moved to a farm home six miles east of Burnstad, ND, where they farmed.

As George took work in other fields, Elsie, continued to work in restaurants and cafes in a career of serving people for over 41 years.

George died on February 11, 1997 and Elsie remained in Napoleon. In October of 2001 she moved to Hosmer, SD where she lived with her daughter and son-in-law, Sandy and Roger Malsam. Elsie moved to the Hosmer Senior Citizen's Home in 2008 where she lived for the remainder of her life.

Elsie was a very giving person in her life. She was known to volunteer for everything. She loved baking and would share her goods with many. She had served the community of Napoleon by serving as a volunteer Emergency Medical Technician for over 25 years. She was a past member of St. Philip Neri Catholic Church in Napoleon.

She loved to play cards and dance but was most fond of spending time with her granddaughter, Tass.

Thankful for having shared in her life are her daughter, Sandy (Roger) Malsam of Hosmer; one granddaughter, Tass Malsam; one brother, Ronald (Eileen) Sieler of Menoken, ND and countless friends whom she touched over the years.

She was preceded in death by her parents, 5 brothers and 2 sisters.

To order memorial trees or send flowers to the family in memory of Elsie Burgad, please visit our flower store.