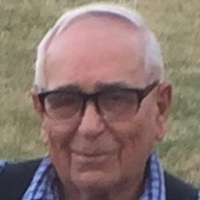 The funeral service for Elmer Leo Schock, 89, of Leola, SD, will be at 10:00 a.m. on Friday, August 2nd at St. James Lutheran Church in Leola with Pastor Sara Sorensen officiating. Burial with military honors will follow at Green Mound Cemetery. Elmer passed away on Sunday, July 28 at Sanford Hospital in Aberdeen.

Visitation will be from 4:00 to 8:00 p.m. on Thursday, August 1st at Gramm Funeral Home in Ipswich and one hour prior to the service at the church on Friday.
Elmer was born on April 8th, 1930 in rural Long Lake, SD to Christoph & Christina (Hoffman) Schock. He attended rural grade school near Long Lake.

In January of 1952, Elmer joined the U.S. Army, being inducted at Fort Sheraton, Illinois. He underwent basic training at Fort Bliss, Texas and was stationed there until September of 1952. He was later stationed at Fairchild Air Force Base near Spokane, Washington.

On January 10, 1954, he received an honorable discharge at Fort Lewis, Washington with the rank of Corporal.

Elmer married Norma Guthmiller on November 26, 1954. For a brief period, they lived and farmed with Elmer’s parents before moving to a rented farm for a few years. On August 26, 1958, they became the proud parents of a son, Dean Alan, and the following year, they moved to their permanent home, a farm located 3 miles west of Leola. On September 21, 1959, they were blessed a second time with a bouncing baby girl, Judy Kay.

Elmer farmed for many years before health issues forced him to retire in the late 1990s. He continued living on the farm until the time of his death.

Elmer was a very sociable person. He looked forward to spending time with his coffee buddies, playing a game of cards, listening to polka music, and was a member of St. James Lutheran Church.

Grateful to have shared his life were his son Dean (Ina) Schock of Leola;