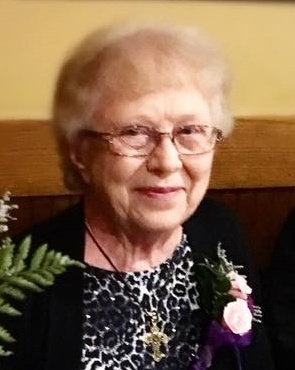 The Funeral Service for Eileen Kukrall, 83, Ipswich, will be at 10:30am, Friday February 11, 2022 at St. Paul’s Lutheran Church, Aberdeen, SD. Pastor Samuel Bobby and Pastor Jacob Smith will officiate. A time of food and fellowship will follow at the church prior to burial at Ipswich Southside Cemetery.  Visitation will be from 6:00pm to 7:00pm, Thursday February 10, 2022, followed by a Prayer Service at 7:00pm at Leonard-Gramm Funeral Home, Ipswich, SD. Eileen died peacefully, surrounded by family on Saturday, February 5, 2022, at Sanford Aberdeen Medical Center.

Eileen Jean (Lang) Kukrall was born October 26, 1938, to Theodore and Rose (Diegel) Lang at home on a farm by Wishek, ND, where she was raised until they moved into Wishek when she was in first grade. She graduated from Wishek High School in 1956. She was a member of the Wishek Reformed Church until after her marriage to ElRoy Fiechtner in 1957.  She then joined the Grace Lutheran Church in Lehr ND. To this marriage there were four children born, Glenn, Pam, Brad and Kim.

In 1988 she moved to Aberdeen, SD where she worked at Pamida until it closed. In 1991 she moved to Ipswich and got married to Delano Kukrall on October 17, 1992, where they made this their home since. She was a member of St. Paul’s Lutheran Church in Aberdeen SD.

She enjoyed Bible Study groups, Christian Women’s, reading, family camping trips and visiting with friends and relatives. She was also an organist in Lehr Lutheran Church for many years and a 25-year member of Gackle Progress Homemakers

She was preceded in death by her parents and one daughter Kim (Fiechtner) Trinko.

Arrangements are with Leonard-Gramm Funeral Home of Ipswich. Condolences and memories may be shared with her family and flowers ordered at www.leonardfh.com

To order memorial trees or send flowers to the family in memory of Eileen Kukrall, please visit our flower store.