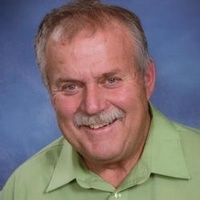 Mass of Christian Burial for Edward "Ed" Kraft, 62, of Ipswich, is 10:30 AM Saturday at Holy Cross Catholic Church in Ipswich with burial to follow at the church cemetery.

A Liturgical Wake Service will be at 7:00 PM tonight at Holy Cross with visitation starting at 6:00 PM.

Memorials are preferred in lieu of flowers and should be directed to "Ed Kraft Memorial Fund," Ipswich State Bank, P.O. Box 8, Ipswich, SD 57451.

Ed was born July 19, 1954 to Andrew and Agnes (Schwab) Kraft. He was one of 12 children. He was raised on a farm SW of Ipswich. He attended Holy Cross Catholic School and graduated from Ipswich Public School in 1973.

He married Lynette Linderman on November 6, 1976. They made their home in Ipswich and together they raised their 4 children, Ryan (Sheryl), Brad, both of Ipswich, April of Livingston, TX and Kayla (Justin) Wambach of Huron.

Ed initially worked for the railroad until the birth of their first child when he took a position with the city of Ipswich for 18 years. He then worked briefly for Oban Construction before starting a nearly 20 year career working at North Central Farmers Elevator until the time of his passing.

He was a lifelong member of Holy Cross Catholic Church and a member of the Knights of Columbus. He had also served as a volunteer firefighter for 15 years. Ed always believed that a good work ethic was a persons finest attribute.

Ed enjoyed making memories with friends and family camping nearly every weekend while his children were young. If he had it his way a family reunion would be an annual event. He and Lynette hosted many family events that they built their home and garage as an "events center" for the sole purpose of these gatherings. He enjoyed anything outdoors, from hunting and fishing, threshing shows, to just "evening out the grass." What he enjoyed the most and took the most pride in was spending time with his children and grandchildren.

He was preceded in death by his parents, Agnes and Andy, as well as his brothers, James, Kenneth, John, LeRoy and Richard.

Funeral arrangements are with Gramm Funeral Home of Ipswich.

To order memorial trees or send flowers to the family in memory of Edward Kraft, please visit our flower store.