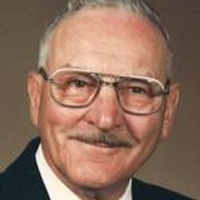 Mass of Christian Burial for Edward Baer, 92, of Aberdeen and formerly of Ipswich, is 2:00 pm Monday at Holy Cross Catholic Church in Ipswich. Burial will be in the church cemetery.

Visitation is 4-5:00 pm Sunday at Gramm Funeral Home in Ipswich and one hour prior to the services at the church.

Ed was born May 9, 1918 to Stanislaus and Mary (Schoch) Baer in Howard Township in rural McPherson County. He was raised on the family farm and attended country school through the 8th grade. Ed then worked on the farm with his brothers and sisters being proud they could save the farm after their father died when Ed was just 15 years old.

Ed married Caroline Fischer on June 20, 1944 at Holy Cross Catholic Church in Ipswich. They made their home on the family farm in McPherson County, 11 miles north of Ipswich. In 1964 they moved to Ipswich where Ed worked as a welder for Taylor Implement for the next 26 years welding for many farmers.

While his wife worked in their yard and flower gardens, Ed spent countless hours in his shop, sharpening knives, saws and mower blades for others. Ed was also a woodworker and shared his talents with many. He was a very giving man who helped on the J.W. Parmley Museum and shared his woodworking skills by helping to build windows for the town's library.

Music was an important part of Ed's life. From entertaining his family when they were on the farm to attending many dances with Caroline to sharing his accordion playing talents by playing for residents of nursing homes in the area, Ed loved a good song. Ed always said he liked to entertain the elderly but never thought of himself as a part of the elderly crowd.

Ed was a lifetime member of Holy Cross Catholic Church and looked forward to church events and was a former member of the Foresters.

He lived his life in simple pleasures, from proudly raising and teaching his five daughters to bringing joy to others he met. Ed had lived actively into his nineties and never considered himself old because he lived his life always looking forward to tomorrow.

His parents, wife, Caroline in 2005, brothers, Alex, Louie and Gene and sisters, Elizabeth, Agnes and Cecelia preceded him in death.

To order memorial trees or send flowers to the family in memory of Edward Baer, please visit our flower store.