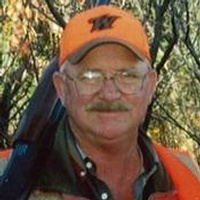 Memorials are preferred in lieu of flowers.

Dr. David Reed Myers was born October 19th, 1949 in Rapid City to Lawrence and Edith Myers. Due to Lawrence's job the family moved around often. He attended grade school in Billings Montana, high school in Tulsa Oklahoma, and college in Stillwater Oklahoma at OSU.

He received his doctorate of veterinary medicine in 1974. While attending college he married Jan Pennock. The couple had two daughters Kelly and Melody. In 1974 the couple moved to Miller, South Dakota to work at the Meriweather Vet Clinic. He moved to Webster, South Dakota in 1976 to join Cross Country Veterinary Clinic. David married Gloria Sessions on May 13th, 1977.

The couple moved to Colorado in 1977, and finally settled in Ipswich, South Dakota in 1980. He took over the practice in Ipswich until the time of his death.

In 1986, his health forced him to slow down, now he could concentrate more on his children, grandchildren and his hobbies. He was a successful race horse owner and breeder, a trophy buck hunter, and a proud angler fisherman.

He was most proud of his most recently stakes winning quarter horse "Ladder". His biggest passion was hunting. Every fall he spent time with family hunting deer, bear, antelope, elk, and pheasants. He was very very proud of his grandchildren and loved to share his knowledge and expertise with everyone. His love of animals was very evident in all aspects of his life.

His health issues were his greatest enemy. He had multiple medical problems that slowed him down, but he never quit. He never complained or felt sorry for himself. He was truly an inspiration to all those who knew him.

He is survived by his wife Gloria, of Ipswich. Three daughters, Stephanie Lacher (Chris Martchinske) of Ipswich, Kelly (Justin) Gieger and Melody Sweeney both of Sapulpa, OK. Three brothers Larry Myers Jr. of Durango, CO, Kevin (Charlotte) Myers of Sheboygan, WI, and Brian (Mary)Myers of Adair, OK. He leaves behind 7 grandchildren, Amanda (Kellen) Fetter of Waynesfield, OH, Ryan Lacher of Ipswich, Tyler Lacher of Ipswich, Amber and Joshua Pickering and Landon and Kellan Sweeney of Sapulpa, OK. He is also survived by his mother, Edith Myers of Sheboygan, WI. He was preceded in death by his father, Lawrence Myers.

To order memorial trees or send flowers to the family in memory of Dr. Myers, please visit our flower store.