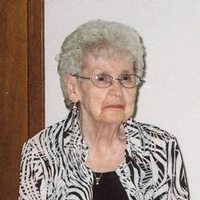 - The funeral service for Darlene L. Drager-Morris-Glaesmann, 94, of Ipswich, is 2:00 pm Friday, January 2, 2015 at Gramm Funeral Home, 720 N 6th Street, in Ipswich. Burial will be in the Ipswich City Cemetery.

Visitation is 5:00 -7:00 pm New Year's Day at Gramm Funeral Home and one hour prior to the service on Friday.

Darlene was born June 2, 1920 to Fred and Ella (Volkman) Drager at Aberdeen, SD. She was raised in Union and Powell Townships in Edmunds County, South Dakota, where Darlene attended country schools.

Darlene was joined in marriage to Robert O. Morris on August 29, 1939. They made their home on farms in Powell area. On the farm, when her children were growing up, Darlene would make homemade bread, a loaf of store bought bread was a treat for her children. The family moved into Ipswich in the fall of 1953. While in Ipswich, Darlene worked for as a waitress at cafes in Ipswich. Bob passed away in 1973 and Darlene continued to make Ipswich her home with her son, Darrel.

After Darlene and her sister, Elma, retired, they did many things together. When there was something going on in Ipswich, Elma would come out and spend a few days, or Darlene would go to Aberdeen and spend a few days there. Darlene would go to Aberdeen with Bev & Louis. There was always time for shopping with Elma. You'd find them in the store together deciding what they should purchase, then going out to have a bite to eat and visiting.

Darlene married Edwin Glaesmann on December 10, 1995. They lived together in Ipswich until Edwin's failing health sent him to a care facility in North Dakota. Edwin passed away in 2006.

Darlene was a member of the UCC Church in Ipswich and also the Ipswich Senior Center where she would socialize with others and played Bingo, Skippo or Uno.

Darlene entered the Golden Living Center in Ipswich on February 28, 2011, for the remainder of her life. Darlene liked to go for Sunday afternoon car rides, get together with family on holidays, bingo at the nursing home with family and friends, and visiting with family, grandchildren, great-grandchildren and great-great grandchildren.

To order memorial trees or send flowers to the family in memory of Darlene Morris-Glaesmann, please visit our flower store.