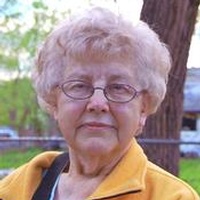 The funeral service for Darlene Rose Thompson Morris, 75, of Pierre and formerly Ipswich, is 10:30 am Thursday at UCC Church in Ipswich. Pastor Susan Carr and Pastor Enno Limvere will lead the worship service. There will be visitation one hour prior to the service.

A prayer service is 5:30 pm Wednesday at the Congregational United Church of Christ in Pierre with Pastor Susan Carr officiating. Visitation will start at the church at 3:30 pm.

Burial will be in the Ipswich City Cemetery.

Darlene Rose Thompson was born in a tar paper house, the home of her parents, Thomas Paul and Thora Juliana (Sivesind) Thompson on October 6, 1936 near the small town of Loyalton, South Dakota. She was the last of seven children. Brothers Bill and Morris and Sister Gladys were still living at home, but the older siblings, Walter, Al and Thelma had all departed to start a life on their own. Her mother named her Darlene so her father would be able to pronounce it with his Dutch accent, but it still came out as "Darlin". Darlene attended country school a few miles from home, walking or riding horse with her brother, Morris. When that school closed, she had to move into Loyalton to live with a family during the week to attend school. She was extremely shy and didn't like that at all. At age 12, she started driving herself to school and quit school when she finished the 8th grade. She loved learning and read many books and later used the history channel to increase her wealth of knowledge. She was happiest when on the farm helping her parents.

In 1962, her parents retired and moved to Ipswich. She began working at a downtown restaurant and met Melvin Henry Morris who worked in the hardware store. They were married August 24, 1963. They raised 3 children; Lorna Juliana, Lee Scott and Darren Henry. Darlene was a stay at home mom for a few years until she began helping out Melvin in their clothing store. Later, she began working for the Ipswich Nursing Home (Beverly Enterprises) and worked mostly night shifts during the next 18 years.

Family was very important to Darlene and she dedicated her life to take care of her mother, then her children, and finally her grandchildren. She enjoyed visits when her 4 brothers would get together and tell stories year after year and try to surprise each other as they returned to Ipswich to visit their mother. Darlene made several trips out to California to visit her brothers and sister. There was only one time that the entire family was together in one place. That made the front page of the Ipswich Tribune: Thora & Tom welcome all seven children home at one time!

Darlene came to Pierre to visit her new granddaughter in 1996 for a two week visit and ended up staying for 15 years, until the time of her death. She loved her grandchildren dearly and was a second mom to them as they grew into young adults. She would often sit and remember how one or the other had done this or that.

Darlene loved reading, baking, gardening and watching old movies. She worked in the Dakotamart deli for 12 years and even though she was still shy, enjoyed visiting with many of the regulars and co-workers. She quit there and went to work at Governor's Inn and then Holiday Inn Express as the breakfast bar hostess until her health and eye sight prevented her from working.

Darlene passed on her love of Elvis to her daughter and together they visited Graceland on the 20th anniversary of his death. She passed on her strong work ethics and endurance for pain to her boys. She chastised them for not visiting a doctor but yet she wouldn't go unless absolutely necessary. She loved her most recent doctors, Dr. Holland, Dr. Wright, and Cris Matthews. She often chuckled about what a hard time she would give them but never complained to them about anything.

She passed away on December 11, 2011 at St. Mary's Hospital at the age of 75 after suffering a major stroke.

Darlene will be deeply missed this Christmas and for years to come. Her traditional spudnuts and cookie salad, chocolate chip cookies and brownies with fudge frosting will carry on through her children and grandchildren. She will join her parents, brothers: Walter Gordon, Alvin Norval, William Clayton, Morris Harold, sister Gladys Evelyn Reilly, mother and father in law, David Henry and Elma Lorna (Drager) Morris and niece, Carol Roesch in Heaven. She will be riding horses, playing with kittens and dogs with perfect eye sight and no health issues.

To order memorial trees or send flowers to the family in memory of Darlene Morris, please visit our flower store.