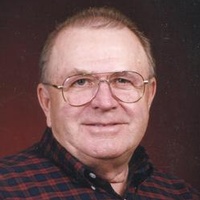 His funeral will be at 2:00 PM, Wednesday, at St. James Lutheran Church in Leola. Pastor Sara Sorensen will lead the worship. Burial will be in Green Mound Cemetery.

Visitation will be one hour prior to the service at the church on Wednesday.

Curtis was born to Karl and Carolina (Maier) Hoffman on April 27, 1931. On June 16 1932, when Curtis was 15 months old, his father was killed by lightning on the homestead. Curtis attended Hoffman Hilltop Country School through the 8th Grade, at the age of 18 he began farming with his mother on the family homestead granted to his grandfather (Frederick Hoffman) 7 miles SE of Long Lake.


He was confirmed at St. James Lutheran Church in Leola, and on October 16, 1957 Curtis married Leona Hoffman, daughter of Dan and Hertha Hoffman, at St. James. Curtis attended rural Hope Lutheran church near the homestead where he served as custodian and caretaker for many years until the church closed in January 1961. The family then attended Salem Emmanuel Lutheran Church in Long Lake, SD until Curt and Leona moved to Leola and attended St. James Lutheran Church. Curtis was active in the church and enjoyed singing in the church choir and teaching Sunday school, he also served as Sunday school superintendent at Salem Emmanuel, he also served on the church council and as Luther League Leader for many years.

His love for music included being a member of the Long Lake Band starting at the age of 15 until his passing. Curtis also played in a dance band for many years, playing the trumpet and baritone. He not only enjoyed playing music, but listening and dancing to old time polkas and waltzes as well.

He was always available for a good game of cards and visiting. He loved stopping at the farm and checking the crops and cows. He loved his family and really enjoyed it when the kids and grandkids would stop by to visit and play a game of cards.

Arrangements are with Gramm Funeral Home of Ipswich.

To order memorial trees or send flowers to the family in memory of Curtis Hoffman, please visit our flower store.