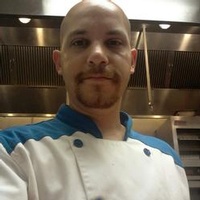 Chris' family prefers casual dress and memorials are preferred in lieu of flowers.

Christopher Michael McCoy was the son of Michael and Dameda (Evenson) McCoy. He was born at Hahn Air Base in West Germany on April 10th, 1983.He came to the United States in February of 1986 as his parents were reassigned to Hill Air Force Base in Layton, Utah. He stayed in Utah and went to school there until his mom retired from the USAF in 1999.

From Utah he moved to Lead, SD and finished his high school years and started his cooking career at Jakes in Deadwood, SD. While in Lead he met Amanda Widener and they soon moved to Kentucky to be near her family and to start one of their own. Crystal Rose McCoy was born on October 7th, 2003, soon to be followed be his son Jesse in June of 2005. The Family then moved to Wichita Falls, Texas for a while before returning to South Dakota.


He moved to Ipswich, SD where he lived with his sister for a while and found a job at the newly opened restaurant named the Wakeside at Mina Lake. His dream was coming true as he was the Executive Chef at the restaurant when he passed away. Chris met Desiree Taylor while in Ipswich and they had just had a daughter, Kyleigh, in May of 2015.


Chris was a very passionate person and when he went after something, he put everything he had into whatever the endeavor was. He loved his children more than anything and his love for cooking followed closely behind. Chris was a very giving person, who if he met someone who needed something he would be there to help in any way he could. He made an impact on just about everyone he knew.

Chris was preceded in death by his grandparents and a step-brother, Michael McCoy III.

He leaves behind 3 beautiful children, Crystal Rose of Texas, Jesse Taylor of Virginia and Kyleigh Louise of Ipswich SD. His father , Michael McCoy of Utah, his mother Dameda McCoy of Arizona, his step-father Jeff Bergstrasser of Arizona, his sister La'Tice of Arizona, a brother , Justin McCoy of Utah and 3 nephews, James, Tristen and Cade.

To order memorial trees or send flowers to the family in memory of Christopher McCoy, please visit our flower store.