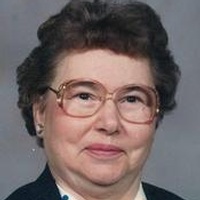 (Roscoe) - Mass of Christian Burial for Christine M. Binfet, 90, is 10:00 am Saturday at St. Thomas the Apostle Catholic Church in Roscoe. Burial will be in St. John the Baptist Catholic Cemetery in Onaka.

Liturgical Wake Service is 7:00 pm Friday at St. Thomas in Roscoe with visitation starting at 5:00 pm.

Christina married Paul Binfet on November 16, 1943 at St. Thomas Catholic Church in Roscoe. They farmed north of Onaka until December 1979 when they moved into Roscoe. Paul passed away November 29, 1980.

While living on the farm Christina taught 1st grade CCD for 10 years and was a member of St. Johns Christian Mothers until 1979. She then became a member of St. Thomas Catholic Church and was involved with the Altar Society and the St. Katharine Drexel Catholic Daughters.

She then moved to Fargo to be closer to her son Paul in August 2009. In November 2010 she became a resident at Bethany. She fought and struggled through the stages of dementia until the time of death on October 3, 2012.

She was preceded in death by her spouse, parents and great grandchild Paul Rylie Binfet.

To order memorial trees or send flowers to the family in memory of Christine Binfet, please visit our flower store.