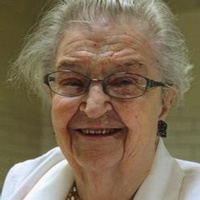 Mass of Christian Burial for Caroline E. Hammrich Armstrong, age 93 of Ipswich will be on Tuesday January 5, 2016 at 2:00 p.m. at Holy Cross Catholic Church in Ipswich, SD with Father Tom Clement celebrating the Mass.

Liturgical wake service and rosary will be on Monday January 4, 2016 at 5:30 p.m. at Gramm Funeral Home in Ipswich, SD with visitation starting at 4:00 PM.

As a young woman Caroline worked on the family farm with her sisters because of her Fathers poor health. Caroline moved to Rapid City in the 1940's and worked as a waitress. While living in Rapid City she met John Armstrong.

On January 14, 1946, Caroline was united in marriage with John "Jack" Armstrong at Holy Cross Catholic Church in Ipswich, SD. After their wedding they moved to North Carolina where John was stationed in the Army. After John's Military Service was complete, they moved to Columbus, Kansas. Later they moved and made their home in Gonzales Louisiana. John and Caroline had one son, John Robert "Robbie" Armstrong October 10, 1953.

While living in Louisiana, Caroline worked at a flea market and acquired a love of antiques and eventually became a collector. She had an appreciation for a nice piece of furniture and a good bargain. Caroline said that half the fun at a flea market was dickering over the price of an item. Caroline recently commented that she is an antique herself.

Shortly after John passed away in 1981, Caroline moved back to Aberdeen, SD. In 2005, Caroline moved to Ipswich. Caroline was blessed to be able to keep her independence and live in her own home until the time of her death.

Caroline enjoyed making new friends and visiting with everyone, playing cards, and going to rummage sales. Caroline is best known among friends and family as the one who cried over everything. Caroline enjoyed hosting Christmas parties at her home. Everyone received a gift, however, some gifts did not receive name tags so it was always a thrill to open a gift and then be told to pass it on because it belonged to someone else.

Caroline was a generous caring person who didn't seem to care much about what others thought. She had her opinions and stuck to her guns on things she felt strongly about.

She was a member of Holy Cross Catholic Church in Ipswich, SD.

To order memorial trees or send flowers to the family in memory of Caroline Armstrong, please visit our flower store.