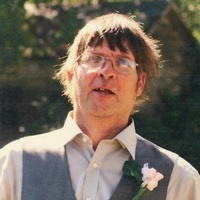 The funeral service for Byron L. Hoffer, 54, of Roscoe, is 2:00 PM Saturday at St. Paul Evangelical Lutheran Church in Roscoe. Rev. Justin Dauck will lead the worship. Burial will be in Morningside Cemetery in Roscoe.

Visitation is 5-7:00 PM Friday at Gramm Funeral Home in Ipswich and beginning at Noon at the church on Saturday.

Byron was born April 18, 1963 to Ron and Elda (Ruby) Hoffer at Bowdle, SD. He grew up on the family farm 2 miles north of Roscoe. He and his brother, Tim, spent a lot of time together. He loved the outdoors, especially hunting, fishing and spending time with his family camping.

In 1979, he beat the odds when he was stricken with a brain tumor which was cancerous. A lot of time spent in the hospital and through many treatments, Byron had a goal of getting home to get in a tractor and get back to school.

Byron graduated from Roscoe High School in 1981 and went on to Vo-tech school in Rapid City where in 1983 he received a degree in auto body. He later attended school in Mitchel for truck driving and for a while he drove truck from coast to coast. For more than twenty years, Byron had been working at Adee Honey Farms in Roscoe.

In 1992 he married Kathy Vilhauer. This union was blessed with two daughters, Belinda and Rachel. Byron loved spending time with his daughters and his four grandsons and one granddaughter.

In the last few years he had taken an interest in wood turning and created many beautiful pieces from pens and bowls to Christmas ornaments that will be treasured by family and friends. He also produced Freedom Pens for a company to send overseas to our Veterans.

Byron loved Christmas and always had his tree up before anyone else. He also loved the Fourth of July and relished the time spent camping with family.

He is survived by his parents, Ron and Elda Hoffer of Roscoe; daughters, Belinda (Gerald) Easterby of Roscoe and Rachel Hoffer of Ipswich; four grandsons, Cash, Draycen, Silas, and Oliver and one granddaughter, Katie; one brother Tim (Stacey) Hoffer of Laramie, WY; two nephews, several aunts and uncles and cousins.

He was preceded in death by his grandparents and uncles, Roland Ruby, Floyd Ruby and Harvey Hoffer and aunt, Joan Hoffer.

To order memorial trees or send flowers to the family in memory of Byron Hoffer, please visit our flower store.