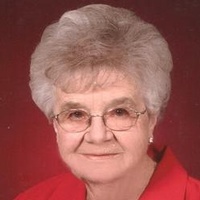 The funeral service for Bernice Beck, of Roscoe, is 2:00 PM Friday, February 17, 2017, at St. Paul Evangelical Lutheran Church in Roscoe. Rev. Dauck will lead the worship service. Burial will be in Morningside Cemetery.

Visitation is 5-7:00 PM Thursday at Gramm Funeral Home in Ipswich and one hour prior to the service at the church on Friday.

Bernice was born December 6, 1928 to John F. and Martha (Wiederrich) Roesch on the family farm five miles north of Roscoe, SD. She attended country school and graduated from Roscoe High School. Following high school she attended Northern Normal in Aberdeen where she earned her Teacher's Certificate.

Bernice started teaching in rural schools. During that time she married her high school sweetheart Reuben Beck on June 21, 1950 at St. Paul Evangelical Lutheran Church in Roscoe. They made their home in Roscoe where Reuben worked with his father at the Phillips 66 Station. He and Bernice eventually purchased the station and also purchased a farm near Loyalton.

She spent 37 years teaching. She taught in five different country schools, spent several years teaching in Loyalton and finished her career teaching 5th grade in Roscoe. During those many years of teaching she continued her own education and attained a Bachelor's Degree from Northern State College in Aberdeen. In 1973 she was awarded a national teaching award that she cherished deeply.

After retirement she and Reuben spent winters in Arizona. She loved to travel and they became members of the Hub City Sam's Camping Club. Their travels led them as far as Hawaii. However, even more than travelling, she loved entertaining family and friends. She was always prepared with a feast of food for those who would stop to visit. Bernice had a wonderful sense of humor that she instilled in her three boys and was enjoyed by anyone whom she met.

When not traveling or entertaining Bernice could be found volunteering around Roscoe. She had been an active member of the St. Paul's Ladies Aide, Roscoe Garden Club and Commercial Club.
Bernice died Monday, February 13, 2017 at Bethesda Town Square in Aberdeen where she had resided for the last several years.
Thankful for having shared in her life are her three sons, Gregory (Rita) of Aberdeen, Richard of Aberdeen and David of Brookings; 11 grandchildren; 18 great-grandchildren; two brothers, Melvin (Julie) Roesch of Roscoe and Donnie (Betty) Roesch of Sioux Falls; two sisters, Jean (Tom) Uhrich of Rapid City and Ruth Beyer's of Ipswich; as well as many nieces and nephews.

She was preceded in death by her parents; her husband; one sister, Esther Buechler; one grandson, Reuben; and one daughter-in-law, Deb Beck.

To order memorial trees or send flowers to the family in memory of Bernice Beck, please visit our flower store.