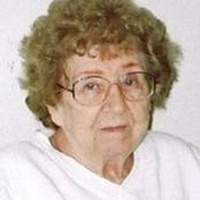 Belle Margret Nikolas, age 103, passed away on Sunday, April 10, 2011. She was born February 18, 1909, to Peter and Lucarda Gasell in Aberdeen, SD and attended school there. Her first job was at Ward Owlsy Candy Factory.

Belle married Joe Nikolas and worked for many years at the Nikolas Grocery. Then she moved to Seattle, WA where she was employed at Frederick Nelson's, Then in Santa Monica, CA at a bakery. They returned to South Dakota and retired at Mina Lake.

After her husband's death, she lived for a time with her daughter, Jean, in Las Vegas, NV and later returned to Aberdeen.

Belle is survived by her daughters, Irene Boyle of Aberdeen, SD; Joan (Grant) Wilson of Duluth, MN; Lorraine Newell of White City, OR; and her son, Donald (Deanna) Nikolas of Portland, OR. She had 19 grandchildren, many great and great-great grandchildren.

She was preceded in death by her husband, Joseph and daughters, Kitty Ziegler and Jean Lindsey.

A gathering of friends and relatives will be at North Highlands United Methodist Church following the cemetery service.

To order memorial trees or send flowers to the family in memory of Belle Nikolas, please visit our flower store.