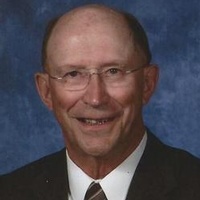 The funeral service for Arnold Schurr, 79, of Roscoe, is 10:30 AM Saturday at the Edmunds Central School Gymnasium in Roscoe. Burial will follow at Morningside Cemetery in Roscoe.

Arnold DeWayne Schurr, 79, born on July 7, 1934. He was the second son of four children born to Hilda and Robert Schurr at Roscoe, SD. Arnold attended country school near the family farm. As a young child he followed his relatives and family friends who served during WWII by reading newspaper accounts and radio reports of war activities. He graduated from Roscoe High School in 1952. The family lived in Roscoe from 1945 to 1955. He married Frieda Mohr Schurr in 1955 and they moved to the farm northeast of Roscoe and had 4 children, she passed away in 1979. In 1980, he married Jeanne Fogle Schurr and she joined him on the farm.

Arnold enjoyed hosting parties for the holidays. He loved the company of his family and friends. His passion in life was farming with his son, Steven. He worked hard every day up until his last breath.

When it was raining or farming was slow he enjoyed car races, traveling the 48 states by car, reading, politics and hunting. He loved to visit with family and friends, whenever possible.

He attended the Roscoe Presbyterian Church until it closed; then joined the Ipswich United Church of Christ, as an active member.

During his life Arnold was very active in the Masonic Fraternities. He became a brother of Devotion Lodge No. 76 of Ipswich SD. He was then able to join the Scottish Rite, the Shrine and Eastern Star. In fact, he just served snow cones at the Shrine Circus, in Aberdeen, with some of his family members.

Arnold was elected to serve on the Oahe board in the 1970’s and even served as the secretary for a few years. He talked about these experiences often and was very proud of their accomplishments for the local area and state of SD. He worked endlessly as the president of the Web Water board, and later in life was an active member. He often shared stories of the wonderful individuals that he worked with on these committees.

Arnold is preceded in death by his parents, his first wife, Frieda, and his second wife, Jeanne.

To order memorial trees or send flowers to the family in memory of Arnold Schurr, please visit our flower store.