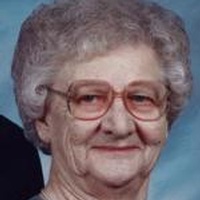 Mass of Christian Burial for Armella Braun, 89, of Ipswich, is 10:30 Tuesday at Holy Cross Catholic Church in Ipswich with Fr. DeWayne Kayser, Celebrant. Burial will follow at Holy Cross Cemetery.

Liturgical Wake is 7:00 pm Monday at Holy Cross.
Visitation is 3-5:00 Monday at Gramm Funeral Home in Ipswich and one hour prior to services at church.

Armella was born January 29, 1921 to Rochus Joseph and Mary Magdalena (Grabowska) Geffre near Leola, SD. She was raised in the area and attended country schools before graduating from Leola High School. Following her graduation she attained a teacher's certificate.

She taught for several years in country schools around Leola. Armella then became the secretary to the McPherson County Superintendant. While doing this she also did bookwork.

Armella married Frank D. Braun on June 12, 1947 at Leola, SD after he had sent engagement rings to her while he served in WWII.

They made their home on the Braun family farm. Together, they built up the farm and constructed a new home to raise their children in. She worked hard with Frank at creating a successful farming and dairy operation while raising her young family.

They retired from the farm in 1986 when they moved to Ipswich. Finally, after leaving the farm, they were able to take a vacation. She enjoyed their travels but loved to come home where she could continue to stay active in the lives of her children and grandchildren.

Her strong faith led her to daily prayer as she would always pray for others. As a faithful Catholic, she took an active role in the church and had served on the Holy Cross Catholic Church Altar Society, the Catholic Order of Foresters and the St. Gerard Study Club. Her faith was also the basis for the quiet wisdom that she shared with her family and her sisters over the years.

She was fond of her weekly card playing group and would fret over the right lunch to prepare. She also liked to do latch-hook work and sharing her creations with family.

Frank passed away on Friday, June 5, 2009 and Armella continued to make Ipswich her home until the time of her passing on Friday, July 2, 2010 at Avera St. Luke's Hospital in Aberdeen.

Her parents, husband, brother, Albert and Sister, Angeline, preceded her in death.

To order memorial trees or send flowers to the family in memory of Armella Braun, please visit our flower store.