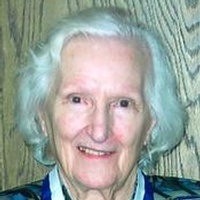 The funeral service for Arline Heckenlaible, 96, is 11:00 a.m. Saturday at the Hosmer Reformed Church with Rev. James Grossman leading the service. Burial follows at Bethany Cemetery.

Visitation one hour prior to services at the church on Saturday.

In lieu of flowers donations to the church, Sr. Citizen's Home or donors choice are preferred.

Arline was born to John and Cora (Knodel) Heckenlaible on August 31, 1916 at Hosmer. As a small child her family lived in San Diego, CA for a year and then returned to Hosmer where she attended school. Arline graduated from Hosmer High School and then attended business school in Mankato, MN. She returned to the area and worked in retail in Aberdeen, SD.

Arline was adventuresome and independently traveled throughout the United States, Canada, South America, Europe and other countries around the world. She easily made friends wherever she went and often would extend her stays. Arline sponsored many children's education through Compassion International and met several of them during her travels. She lived for a year in Mexico and for five years in Hawaii, but always called Hosmer her home.

Besides her worldly travels, Arline served as the president of John Heckenlaible, Inc, a company her father founded in 1935.

She also was an acclaimed poet and writer, having had several works published. She could often be found attending writers workshops.

Arline passed away on February 17, 2013 at Hosmer Sr. Citizens Home.

To order memorial trees or send flowers to the family in memory of Arline Heckenlaible, please visit our flower store.