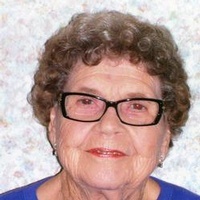 The funeral service for Ardis L. Bailey, 91, of Ipswich is 2:00 PM Wednesday at Gramm Funeral Home, 720 N. 6th Street, in Ipswich. Pastor Enno Limvere will lead the service. Burial will follow at the Ipswich City Cemetery.

Visitation is one hour prior to the service at Gramm Funeral Home.

In lieu of flowers, memorials may be given to the Ipswich United Church of Christ.

Ardis Lamae Bailey was born in Aberdeen, South Dakota on September 23, 1924 to Edward and Cora (Niles) Larson. She was the fourth of six children. Ardis attended school in Aberdeen and graduated from Aberdeen Central High School. Following graduation, she worked locally.

Ardis married Walter Albert Bailey on December 17, 1949 in Aberdeen. They farmed in the Loyalton area until 1991 when they moved into Ipswich. Walter passed away on January 21, 1998.

On February 24, 1999, Ardis became a resident of the Ipswich nursing home. She was a member of their Resident's Council and maintained the nursing home scrapbook for many years. She enjoyed the activities there, especially playing cards, games and hearing the music programs.

Ardis loved "to entertain," as she said. She was a wonderful cook and baker, especially breads. The freezer was always full, and the coffee was always on. Ardis could put a meal on the table in a moment's notice and often did. She also enjoyed hosting family and friends for holidays, birthdays and other occasions.

Ardis had a delightful sense of humor, and liked to joke about being Norwegian.

Ardis enjoyed music and dancing. In their younger years, she and Walter danced with local square dance clubs. Also, throughout the years, Ardis drove many miles, going to musical events where Walter played the fiddle. Together, they attended the state contests, Fort Sisseton events, local programs and dances and many practice jam sessions.

Ardis was a member of the Ipswich United Church of Christ. She was active in Women's Fellowship, selling greeting cards as a fundraiser for many years. Ardis was a church council member and also served as the Moderator.

Ardis was a longtime member of the Sunshine Study Club. Members from the Loyalton, Roscoe and Ipswich areas met regularly for study and fellowship until the club disbanded.

Ardis was preceded in death by her husband Walter, her parents, three sisters and their husbands, two brothers, one sister-in-law, her husband's brother and sister and their spouses, several nieces and nephews and great-nephew, Bryan Larson.

To order memorial trees or send flowers to the family in memory of Ardis Bailey, please visit our flower store.