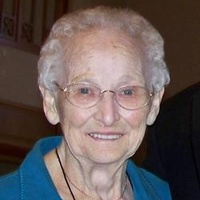 Mass of Christian Burial for Anna E. Binfet, 94, of Leola, is 10:30 AM Wednesday at Holy Cross Catholic Church in Ipswich. Interment will be in Holy Cross Cemetery.

Visitation begins at 4:30 pm Tuesday with a Liturgical Wake and Rosary starting at 5:30 all at Gramm Funeral Home, 720 N. 6th Street, Ipswich. Visitation continues one hour prior to Mass at the church on Wednesday.

Anna Elizabeth Binfet was born March 26, 1919 at Ipswich, SD to Leo and Theresa (Schmitt) Baer. She attended Holy Cross Catholic School through the sixth grade and then became a boarder at St. Francis Academy in Hankinson, ND, where she graduated from high school.

Upon returning home, she taught rural school in the Onaka, SD area. While there she met and married Joseph Bernard Binfet on September 18, 1944.

They made their home in Onaka until Joseph died on September 11. 1948. She then moved to Ipswich with her daughter JoAnn. A second daughter, Jean Marie, was born just three months later.

Anna raised her two daughters in Ipswich and worked at the ASC Office for 23 years. Upon her retirement she moved to Leola where she enjoyed her daughters, grandchildren, flower garden, knitting and gardening.

She was preceded in death by her husband, parents, five sisters and two brothers.

To order memorial trees or send flowers to the family in memory of Anna Binfet, please visit our flower store.