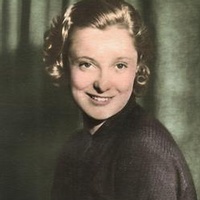 Anna Marie Spitzer-Prisbe, 96, passed away peacefully on Monday, March 3, 2014, at Edgewood Assisted Living in Spearfish, SD. Ann was born on a farm near Eureka, SD on October 21, 1917 the daughter of John and Rosina Spitzer.


After her graduation from Roscoe High School in 1936, Ann worked in the Roscoe Post Office. She left the security of the small town she loved during World War II to do her part in service to her country by working in a bomber plant in Detroit. While there she met Joe Prisbe, the love of her life. They were married in Roscoe, SD on November 4, 1944. They resided in Roscoe until Joe's passing in 2007. They had two sons, Gary and Douglas, and later the daughter Ann always wished for, Patricia, Douglas' wife.


Ann and Joe operated Prisbe's Cafe on main street in Roscoe from 1945 to 1956 when they opened a clothing store on Main Street called Jo-Ann's Apparel & Gift Shop which they operated successfully for over 33 years.

Ann's life was dedicated to beauty in all of its expression and form. Her love of family extended beyond the home and into the community. Honoring her parents and the heartland work ethic, Ann always strived to improve her life, her family's life, and the life of the community she loved. She was instrumental in organizing a community garden club which led to the creation of a city park noted for the beauty of its floral plantings. She excelled at and taught ceramics, both in her home and the surrounding communities. She enjoyed caring for their home and yard, decorating for all occasions and holidays, especially Christmas. Ann was active in the local business association and community events. Her eye for beauty and aesthetics made her a valuable volunteer for events such as the snow queen pageant, homecoming parades, and garden club activities.

Ann's faith was important to her. She believed in the power of prayer. She was a member of St Paul's Lutheran Church all of her life. It was there that she was baptized, confirmed, married.

Ann was a compassionate person. She believed in the principles of "the golden rule" and the responsibility to care for those less fortunate. Ann's strong sense of empathy extended to all creatures believing them to be part of God's creation. In her mind, animals were not inferior creatures but were deserving of respect and compassionate treatment. At various times in her life, she befriended deer and squirrels, feeding them from her hand. She also appreciated and fed wild birds. Her favorites were goldfinches for their color and meadowlarks for their song.

It seems ironic that a person so in love with beauty would, in her later years, lose her eyesight to macular degeneration. However, in her typical spirit, Ann did not let this deter her from expressing her creativity. Right up until shortly before her death, she enjoyed her hobby of dried flower pressing, creating beautiful framed artworks. She would immerse herself in this work for hours at a time, all the while marveling at the diversity of God's creation.

The family would like to extend a special thank you to the staff at Edgewood Assisted Living for their kindness and compassionate service.

The visitation for Ann will be held on Monday, March 10th at Gramm Funeral Home, 720 N. 6th Street, in Ipswich from 4:00 to 6:00 p.m. Funeral service will be at St. Paul Lutheran Church, in Roscoe on Tuesday, March 11th at 10:30 a.m. with reception to follow at the Roscoe Community Center.

In lieu of flowers, the family requests that donations be made to Feeding South Dakota.

To order memorial trees or send flowers to the family in memory of Ann Prisbe, please visit our flower store.