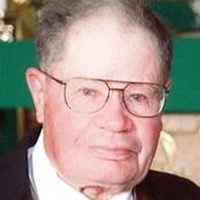 Mass of Christian Burial for Andrew D. Schumacher, 82, of Ipswich is 1:00 pm Monday at Holy Cross Catholic Church in Ipswich. Burial will be in Holy Cross Cemetery.

Liturgical Wake Service is at 5:00 pm Sunday at the church with visitation starting at 4:00 pm.

Andrew, or Andy as he was known by many, was born on October 24, 1930, on a farm near Ipswich, SD. He attended country schools and then went to high school at Assumption Abbey Prep School at Richardton, North Dakota.

After graduating from high school he entered the U.S. Marine Corp in 1950 and proudly served his country until 1953. Andy then attended a technical school in California where he attained a degree in Aviation Mechanics.

Andy returned to South Dakota to help on the family farm the following summer. In 1959 he purchased the farm from his mother and got married to Marlene J. Famias. They made their home on the farm as Andy continued to work the land and raise cattle. He continued to live there until August of this year when he moved to Nano Nagle Village in Aberdeen.

During his high school years in North Dakota, Andy started boxing. He continued to box during his military career and upon his return home. He attained Golden Glove Status and quit boxing around the time of his marriage with an undefeated record.

He was an active member of Holy Cross Catholic Church and had helped to build the current church. He served as an officer of the Catholic Men's Foresters to which he had belonged for over 50 years. Andy was also active in the American Legion as a member for over 50 years and had served as the Sergeant at Arms. He proudly took part in many Military Funeral Details.

Andy's passion though was for tractors. In his life time he worked on over 200 tractors restoring many to near new condition. He liked to go to auctions as a social outing and loved to travel with his family.

To order memorial trees or send flowers to the family in memory of Andrew Schumacher, please visit our flower store.